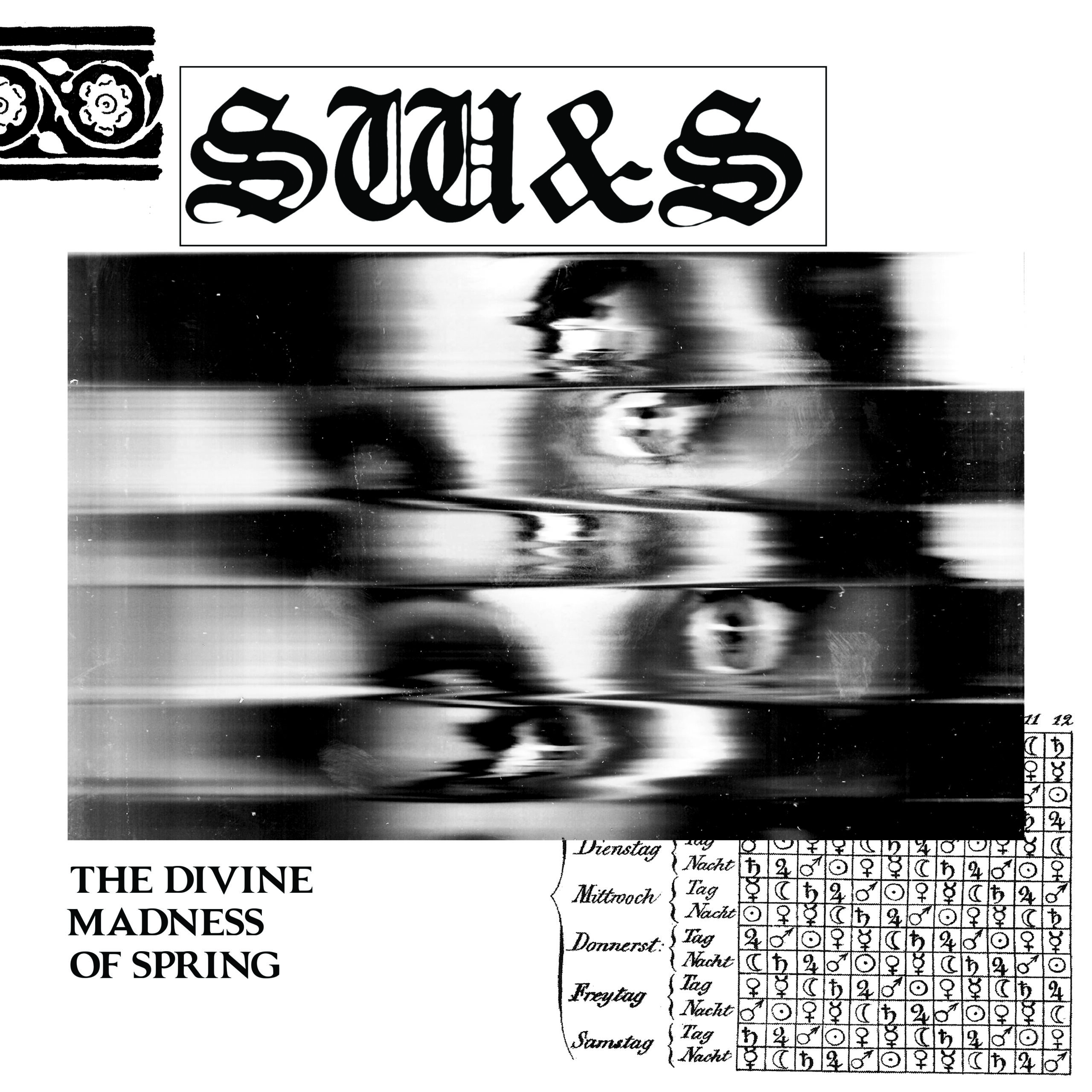 Sleeping Witch & Saturn’s The Divine Madness of Spring feels like a journey, quickly flipping the steady ground the album starts on, as odd and unnerving musical turns and lyrics hint at the combinations of rowdiness and reflection, spectral visions and raw reality, city sunshine and pitch-black night that push through onto the record. The band describes the album as exploring “the relationship between spirituality and mental illness through the lens of the occult,” and the swirling soundscapes certainly evoke a sense of otherworldliness and esotericism, putting you in “the headspace of someone moving through altered states, their percussive periods, and their aftermath.” This movement through states, realities, and memories is reflected in the way the band works with the push-and-pull of a tight, grounded rhythm section paired with guitars that seem to twist and bend through the songs, moving in a ghostly way between the vocal melodies.

Album opener “Carousel” throws you into the feeling of reflection and shifting time, using the past to contextualize the present as Matt Vituccio sings “recognize where you’re standing / where you’ve been and where you are today / don’t forget what you’ve been given / should you one day give it all away” over a thumping, stomping beat from the rhythm section. The beat feels almost hypnotic, lulling you into the sway of the record while lyrics like “if in this tangled life not living / is part of the passion, I jest “just send me on” / an ancient dream, divine and twisting / in front of the eye and I play my last song” preview the darker ideas the group grapples with.

The divine madness from the record’s title kicks in with “25 Lessons in Hypnosis,” a straight-up ripper and one of the hardest rocking songs here. It grows from Anna Shaw’s driving eighth-note bassline which allows Rowdy Kanarek to let loose with some wicked, but tasteful, riffs on the lead guitar in between the rapidfire verses packed with lines like “what’s a right mind? / What do you mean “get better”? / Run until you’re down” and “the punks are selling acid on the corner, San Francisco / and every city is the same in the sun / every religion is the same in the sun / and every religion is the same in the twilight.” The frantic feeling of the first half of the tune combines with the primal bridge to create an unnerving atmosphere where the divine madness from the title also feels like the “derangement of senses” poet Arthur Rimbaud wrote about, as your mind almost winds into a spiral trying to follow the band’s race to the end of the song.

“Good Heavens” starts off in a deceptively ethereal and spacey way before kicking into a swagger-filled guitar riff that matches Vituccio’s delivery of lines like “my precognition / says I could do it if I try / you’re such a clown / you don’t know how you sound / better to keep it all inside” and “If I don’t worry / I cannot let me down, you see? / Please understand, I just do what I can / I don’t see what else I could be.” It’s followed by “Knife,” another tune that seems to grow organically out of Shaw’s bassline and Alex Nelson’s driving drums. Kanarek’s winding lead guitar lines stick out here as well, launching off for runs after the chorus of “and I confess a certain turn / unto my passing spirit and to thee / something came through / when the wind blew snow from the trees.” Both songs are standouts on the first half of the record, sounding like the band confidently building off the foundation of the first two tracks.

The Divine Madness of Spring takes a marked turn with “Book of Saturn” beginning with a demonic back-and-forth between the bass and the drums quickly joined by a brash, unsettling lead guitar line. The sound creates a sense of mystery and doom, like the opening of the gate to another realm, and indeed, the lyrics are delivered almost like incantations as Vituccio deadpans lines like “touch the flame / hold me down / get the knife / spit in your face / walk a thin line / hit the vein / curse your crossers / kill the president.” So much of the record is built on a contrast of the grounding bass and the free-flying guitars and synths, and this conjunction is maybe most noticeable on “Book of Saturn,” where the bass almost feels like the magic circle protecting the magician from the forces they have summoned and keeping them grounded in their world, especially as the song becomes more phantasmic and swirling, only to end with the bass thumping like a heartbeat.

“Repetition Compulsion” picks up this dark, esoteric feel with a ghoulish-sounding chorus of “sometimes we don’t intend to prey on one another / there’s a system for the sick and a practice for the damned / when the post-impressive modern takes a toll on your mind / you got to find a way to shake it or there’ll be another innocent one dead” and a narrative that feels like a surreal take on Springsteen’s “Spirit in the Night,” setting the scene with “Sally was in the back, Joanie was riding shotgun / the moon hung high above the pines / Charlie had a switchblade somewhere out of sight / and a lucky strike kept behind his ear,” with some nice touches from the tambourine and greasy lead guitar.

The group pulls back a little with “Midnight Launderette,” which feels like a late-night blue-lit scene of someone reflecting on the ghosts in their memories as the chorus of “I know the days feel more like moments / and every moment just turns to tears / I try to tell you what it takes to break from this / but you always bring it back to here” is one of the breeziest on the record. It’s followed by “Ghost,” an explosive hard rocker with appropriately spectral synths and a melodic bassline that again anchors the song while also pushing it forward with some intensity. “At Eternity’s Gate” is a doom-filled meditation growing from a haunting acoustic line paired with some hand percussion while Vituccio delivers lines like “a need of open arms, a needle in the skin / a fortress on the surface, a feather in the center, a serpent in the pit” with his voice more delicate and raw than at any other point on the record.

Sleeping Witch & Saturn carry that sense of doom, finality, and exhaustion from “At Eternity’s Gate” over to the mellow, droning intro to “Joanie, Get Up”—but here that feeling subtly transforms from doom to peace and acceptance, with the song turning on its head into an exultant party. Coming to this point on the record echoes The World card showing up at the end of the Tarot Major Arcana. Following euphoric highs and morbid lows that preceded it, The World card brings not only a sense of completion, but a new beginning grown out of synthesis of everything that came before it, good or bad. The guitars sound celebratory on here at the end of the album, and the chorus of “but I’ve tried through all my life / and it has never kept me sane / and in all my time / I’ve had a million amends to make” comes across more like acceptance and understanding than it does a desperate confession.

As the group jams off the last chorus, things halt to a slow pace, not limping to the end, as much as making sure to emphasize the final lyrics of “you might say that you knew me well / but I’m glad I quit trying to explain myself / well I like you, but the show inside / is a dream and thus enchanted by a starlit night.” The record ends just after that line in an almost understated way, given what came before. The summoned spirits and memories have vanished as quickly as they appeared and we’re left with silence and contemplation on the experience.