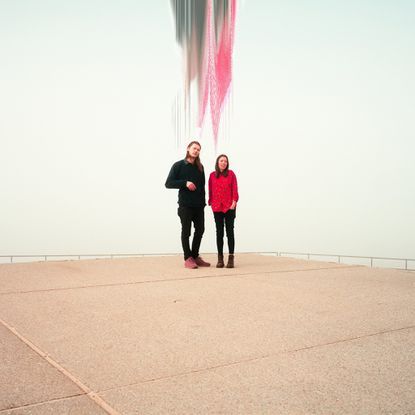 Ratboys have always had a knack for writing songs that emanate an adventurous spirit. The songs on their 2017 record GN showed this spirit off particularly well—full of character sketches and scenes taken in equal measure from historical figures, personal experiences, and fictional creations, GN felt rich and rewarding, like a travelogue of somebody bravely experiencing a big wide world around them.

Printer’s Devil, the Chicago band’s latest record, treads similar ground without ever feeling like they’re rehashing the same ideas. Instead, Printer’s Devil sees the band tightening and sharpening everything that they’re best at—the characters are clearer, the stories are more evocative, and the songs really pop with slicker production value.

Opener “Alien With a Sleep Mask On” is a perfect example of their amplified greatness. Undoubtedly the catchiest song they’ve ever written, “Alien With a Sleep Mask On” starts the record off with an ecstatic burst of energy that gives an extraordinary character (an alien) a familiar longing for excitement—”I don’t get beamed down this way usually/ But, it’s time for a change of scenery.” The band reaches new heights during a massive bridge that seems to mirror the song’s interstellar interests—here, Ratboys maintain their core personality while confidently expanding their range.

The ebbing and flowing emotional wavelength of Printer’s Devil helps the record maintain the travelogue element that made GN such a rewarding listen, and because of this Printer’s Devil feels like another perfect record for the open road. The one-two punch of “Alien With a Sleep Mask On” and the rollicking, boisterous “Look To” settles into a more patient mood with “My Hands Grow,” which leans a little bit more into the band’s alt-country sound. “My Hands Grow” shows off one of the band’s best qualities in Julia Steiner’s curious, sincere vocals, giving the song an extra level of texture in its shimmering harmonies.

The final two songs on Printer’s Devil are the ones that most powerfully show off the band’s growth. The penultimate “Listening” perfectly encapsulates everything that makes Ratboys so wonderful, a perfect stare-off-into-the-distance folksy rock song that seems to sing the praises of keeping your ears peeled—”maybe I’ll find something that’s right/I’m listening through the wall.” The band has composed a wonderful catalogue of songs that create little worlds from inquisitively observed details, and  “Listening” speaks to the power of staying present enough to pick out those details and subtle changes (“everyone looks different at night”). Meanwhile, Dave Sagan and Steiner’s guitars get into a mesmerizing rhythm of noodling solos and dense strums, bursting and blooming behind Steiner’s steady vocals.

While “Listening” may be the crowning jewel here, the closing title track might actually be the most exciting song on the record. Resting on a droning, pulsating synthesizer and a mechanical, tick-tocking drum beat, “Printer’s Devil” tries on new textures for Ratboys that pay off in spades. Steiner has said that the title was inspired by an antiquated name for Walt Whitman’s early job as a printer’s apprentice. In the press release for the album, she said “I don’t know if this actually happened, but I have a feeling that maybe this was one of the first times he experimented with poetry.” There is a similar blank-page feeling to “Printer’s Devil,” an intricately layered track that feels dense with new possibilities, new chances for greatness and adventure.