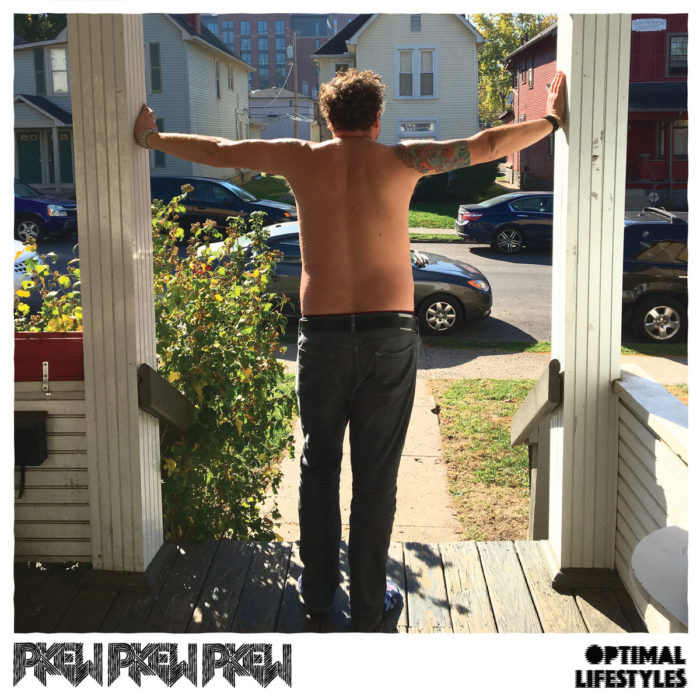 Pkew Pkew Pkew’s Optimal Lifestyles feels more like a fourth or fifth album than a sophomore record, but perhaps that’s because their self-titled debut had them moving fast enough that they traveled through time. This album may be a slightly different kind of a party, but it’s certainly not any less of one. The band brings the same punk energy, though it has been refined and honed into something extra special.

“Aging party punk” is an accurate description of these songs, which is only supported by the semi tongue in cheek title and the artwork that serves as a perfect visualization of both the aftermath of a party and the aftermath of a lifestyle as a whole. Much of this album sees the band coming to terms with getting older, while celebrating continued youth. This leads to what almost feels like nostalgia for the present. Yes, there is an acknowledgement of the fact that drinking, skating, and staying in shitty hotels has more of an effect on their bodies than it used to, but that is met with a genuine certainty that it doesn’t matter because there’s nothing else they’d rather do. Albeit flawed, this is the dream.

While the mindset of the lyrics is maturely immature, the music itself has grown up even more. There is a lot to love about straight, nonstop orgcore music, but Pkew Pkew Pkew was able to blend that together with other influences to create a sound with impressive depth. This hazy, washed out punk is akin to Beach Slang and even leans a bit toward Bruce Springsteen, including the saxophone solo in “Point Break”.

Songs like “The Polynesian” and “Skate 2” see all of this coalescing. Both showcase narrative lyrics that don’t take themselves too seriously; they mix humorous one-liners with immediately memorable choruses. The underlying momentum has just enough restraint that you’re left wondering where things will go next. The music exudes a sense of familiarity that is equally as hard to describe as it is to pull off.

Optimal Lifestyles sees Pkew Pkew Pkew doing everything a good band should do. There is clear growth without a loss of authenticity. There is self-awareness without taking things too seriously or needing to change for anyone. And, most of all, there is a whole lot of fun.