Album Review: PHONY — ‘Knock Yourself Out’ 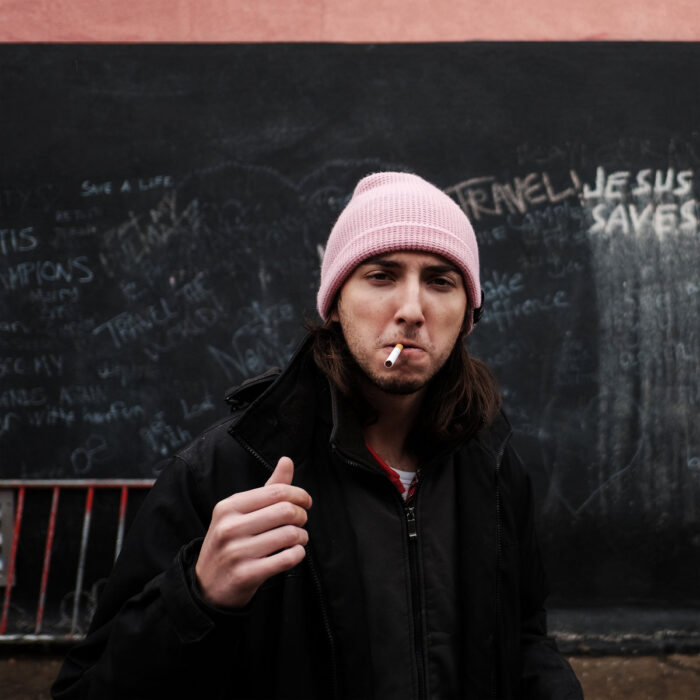 Knock Yourself Out is a soundtrack for fatigue. Sonically, it’s suited for sedating yourself, exuding a simmered aura. It also feels dim, similar to Tigers Jaw in that sense.  It pulls from the grittiness of shoegaze and the sprawled-out nature of slowcore, with some tracks heavily leaning towards one more than the other. “Waffle House” and “Turnstile Effect” are the haziest and most soothing. “Relax,” one of the project’s strongest tracks, has a captivating jangle to it, and “Peach” ends with a bevy of jutting, burly riffs.  The vocals are tempered, often sinking into the instrumentals and becoming nearly equalized with them at several points.

But thematically, too, it’s the byproduct of feeling overwhelmed. The most salient example of this is the track “I’m Not Going To Your Show,” which is a voicemail from Phony frontman Neil Berthier’s cousin, David, informing him that he’s going to miss the band’s upcoming concert. “I have a ten-hour day on Friday,” he explains,  “and I have to learn how to do something in one day that most people learn how to do in like, three.”

The voicemail itself is relatively straightforward; it’s from an exasperated man plagued by FOMO who wishes he had more time and energy. But as for Berthier’s decision to include it, there’s more room for interpretation. At the very least, we can infer that it was deliberate, and that David’s overall stress and dismay are echoed in the album’s songwriting. There’s quips about enduring an anxiety attack and realizing you might be teetering on the edge of a drinking problem. “Two Thousand” which reads more like a collage of lyrics than a cohesive song, veers towards nihilism, opening with “I believe that some would say the world is cursed to bleed away.” Then on “Peach,” Berthier is haunted by the idyllic memories of a past romantic flame, but also cognizant of the necessity to let it culminate in order to allow for something better to bloom (“when this fades to black / you’ll feel something new”).

David’s voicemail closed with him stating that he’ll see Berthier perform in 2026 or 2027. It’s ostensibly sarcastic, but pinned up by the notion that the troubles we’re addled by are nearly impossible to surmount. Then, there’s a line in “Waffle House” asserting that there’s no right time to quit smoking cigarettes, and more vastly, on “Gold” comes the confession “I’m terrible at being a human being.” Residing in a mess is easier than cleaning it up. If that weren’t true, this album wouldn’t have come to fruition.