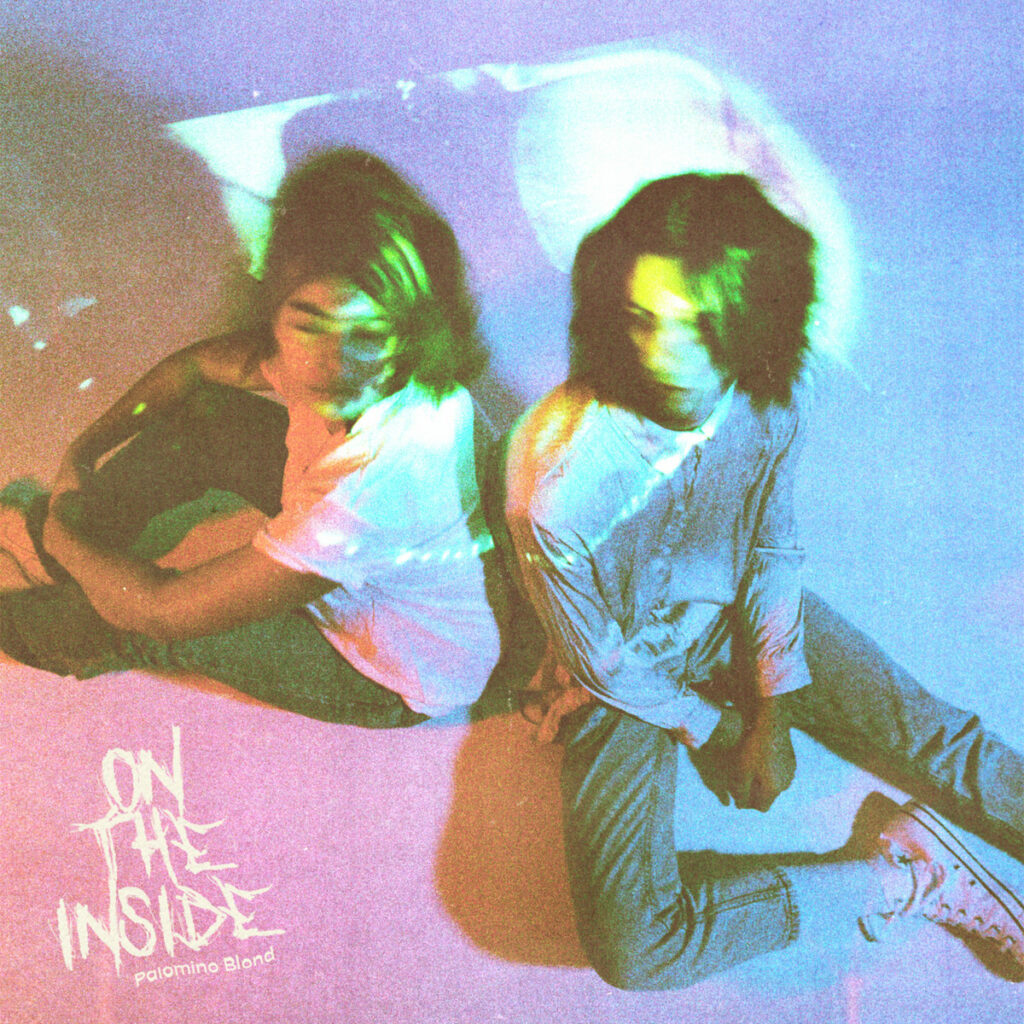 Palomino Blond start off ontheinside with a cinematic, synth-heavy title track that burns slowly, full of an underlying intensity that fits Carli Acosta’s delivery of “I’ll be quick you just need to know this,” and “I’ll just try to survive / on the inside.” The song works as a preview of the rest of the album musically and lyrically, as Palomino Blond’s tunes feel simultaneously reserved and bursting with energy—even in their quieter moments, the band sounds one explosive drum fill away from delivering a massive chorus or incendiary guitar riff.

“ontheinside” is followed by “Phoebe,” the first track released in the run-up to the record. While staying within the overall soundscape of the album, “Phoebe” adds some 80s sleaze to the guitar and brings at least two infectious and sugarcoated vocal hooks from Kyle Fink (the band has two vocalists that trade off lead duties, but the sound really comes from the pairing of Acosta and Fink’s vocals). It’s followed by “Magnolia,” which pulls the tempo back briefly with an airy opening melody and cleaner guitar before turning into a swirling shoegaze track under Acosta’s delivery of “does it hurt a lot?” It’s an excellent song to cap off the opening three, which show different sides of Palomino Blond while all existing within the sound they’ve established.

“Stone” takes things in another direction with a breezy 90s melody in the verses and a heavier, droning chorus. While the loud and layered moments are extremely fun, it’s also impressive how captivating Palomino Blond can be when taking a more minimalist approach between the waves of distortion. “Lovely” is the shortest track on the record and starts with a gripping 90s rock guitar line matched perfectly by the vocal melody. The song turns on its head about halfway through with a fat ass guitar riff leading into Acosta screaming “reaching out grabbing what’s left of me by the threads.”

It’s one of the more intense moments on the record, but quickly gives way to the hazy vibes of “Ultraviolet,” which pulls things back in the verses while ratcheting up the heaviness in the chorus with one of the bigger drown-you-in-sound moments of the record. Album closer “Secrets” begins with palm-muted guitar and strongly cinematic feeling, making it a nice bookend with the title track. It doesn’t take long for the distortion to break through, and the final vocal melody—backed by a wall of guitars and a tasteful riff floating over the top—makes for a great album closer, switching back to the palm-muted riff from the start for a few bars before fading out.

In a year where so many of the best records seemed to hover around the 30 minute mark, ontheinside is a wonderful album that manages to deliver the band’s vision in just under 27 minutes. As a debut full-length, it’s an impressive project, and Palomino Blond should definitely be a band to keep an eye on.

The group has vinyl, cassettes, and CDs up on their Bandcamp and through Limited Fanfare Records.