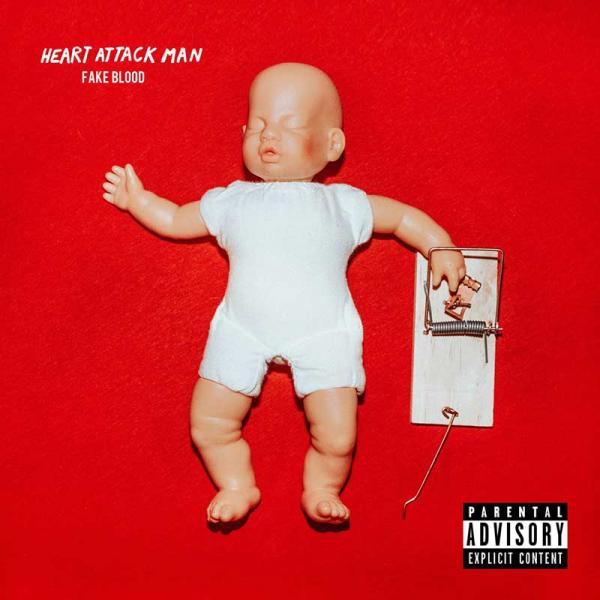 Heart Attack Man have been gaining a lot of traction lately, in part due to frontman Eric Egan’s raucous online presence and the ever-expanding meme culture of the DIY scene. You probably won’t ever hear anyone saying that Heart Attack Man take themselves too seriously, with the band making shirt designs sporting a nearly illegible “metalcore font,” and the “selling his beanie on eBay for $100K” stunt, but besides all that, Heart Attack Man create well-composed and catchy songs with serious and provoking lyrical content.

The band’s newest release, Fake Blood, is a powerhouse record of classic rock riffs and infectious melodies. Right off the bat, the titular track ropes you in with an addictive earworm of a hook. The album is reminiscent of the kind of alt-rock that was popularized in the late 2000’s, but it’s the thematic content of the record that really convinced me that Fake Blood is going to be a seminal release in the bands discography. Egan is not afraid to be the kind of person that he knows he is, and realizes that pretending is more dangerous than being honest with yourself. That “fake blood” that courses through you isn’t the real you, and you need to break that facade and be true to yourself.

A standout song on this album is definitely “Cut My Losses.” The content is difficult for some people to hear, as it touches on the futility of dealing with people who want to drag you down with them. Sometimes, despite your best efforts to be supportive, your advice never really sticks, and it’s not selfish to get away from that negativity before it kills you, too. I think that theme carries through the whole album: if you’re faking it—your empathy, your personality, your ambitions—for the sake of everyone else, you’re only hurting yourself. Egan moves this lens from the individual and onto the whole of society with “Crisis Actor,” where he tells the listener to “just say your lines,” even if it means you have to sacrifice who you are on the inside. However, this isn’t advice; it’s a criticism. By adhering to the acceptable norms, you may be ignoring your true nature just to fit in.

To me, Fake Blood is about standing out, even if it makes you look like a weirdo. While the prim and proper among us may recoil at the sight of a baby doll with its hand in a mouse trap, Heart Attack Man embraces that misfit energy and uses it to tell us the hard truth that we sometimes don’t want to hear. There’s a place for the outcasts, where we can be strange together and not have to apologize for the crazy things that we enjoy, and the soundtrack to that party will most assuredly be Fake Blood.