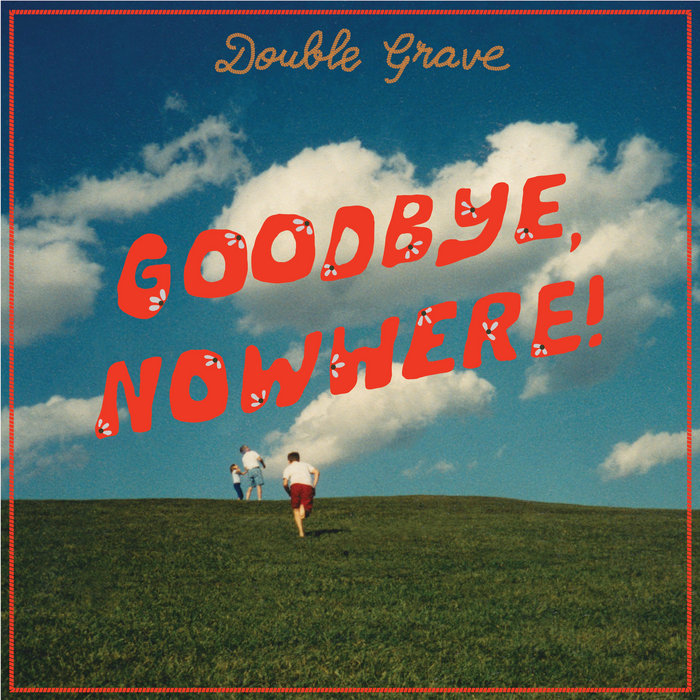 Goodbye, Nowhere!, the second full length from Minneapolis trio Double Grave, begins at rest. The opening track, “Out Here,” lures you in with wind chimes rattle in the wind, birds cawing from above. The chimes appear so scattered that you can hear the surrounding space as if they made the track with a field recorder. This attention to detail is part of what makes Double Grave such an exciting group. It’s no surprise they’ve been garnering increasing praise and fandom in the three years since their debut, the 2017 Sad Cactus release, New Year’s Daydream. This year would’ve seen them support Ratboys on their tour for Printer’s Devil. Double Grave’s sound lands perfectly in the center of acts from the country-tinged rock of Ratboys, to Peaer’s slowcore dalliances, and to Pile’s unpredictability. There’s something for everyone.

Though “Out Here” is a reposed start to the record, the final few seconds feature the crash of drumsticks and flow effortlessly into the first single, “The Farm,” a sprawling, lush piece of shoegaze. I hope you took a breath at the start, because from “The Farm” all the way to “Actor,” the band is firing on all cylinders, fuzzed-out guitar and commanding drums melding into a forceful wall of sound. In that mix lies “NNN,” whose title stands for nothing, no one, nowhere. It’s a song about pushing yourself to do something despite there being no real motivation to do so. The band’s vocalist, Jeremy Warden, affirms “gotta get up / gotta go out / gotta be good to myself.” As hard as the first two can be, they require only physical action. The last one is done more in the abstract, with one having to judge everything they think or do, “Is this good for me?,” and that ambiguity feels central to much of Goodbye, Nowhere!.

Much of the record’s songwriting is candid. Often Warden will cover the sadness at a lyric’s surface with humor, like on “Actor.” Mostly a strummed acoustic guitar holding the song up, Warden plays with emotional performance—“Should have been an actor / Then I could be anything / Be fine or whatever.” Of course, if he were acting, he wouldn’t truly be fine, just appear to be. Even the veneer of having no problems can be freeing. On “Slime,” a truly captivating song that reads like the intersection of LVL UP and Ovlov, he reflects on the intractable nature of human imperfection but notes that “men are slime / I would know,” whatever specifically leads him to make this claim, he’s aware he isn’t immune to it.

Slime comes up again in the record’s last few lines—“It’s too late for everything, nothing here to help anything grow / all covered in slime, I know.” Hopelessness and hopefulness swirl around one another throughout the record, fighting an endless battle that at the present moment exists within most of us. Warden’s ability to capture that feeling, and his bandmates’ skill at making it palpable in the music, is breathtaking. Those bandmates, bassist Bree Meyer and drummer Seth Tracy are invaluable, the strength of their craft clearly remarkable. Every second of Goodbye, Nowhere! instills the listener with a feeling of being seen, even as Warden is speaking to his own reality. Despite the album’s title, which boils down to being firmly planted where you stand, the band is going places.