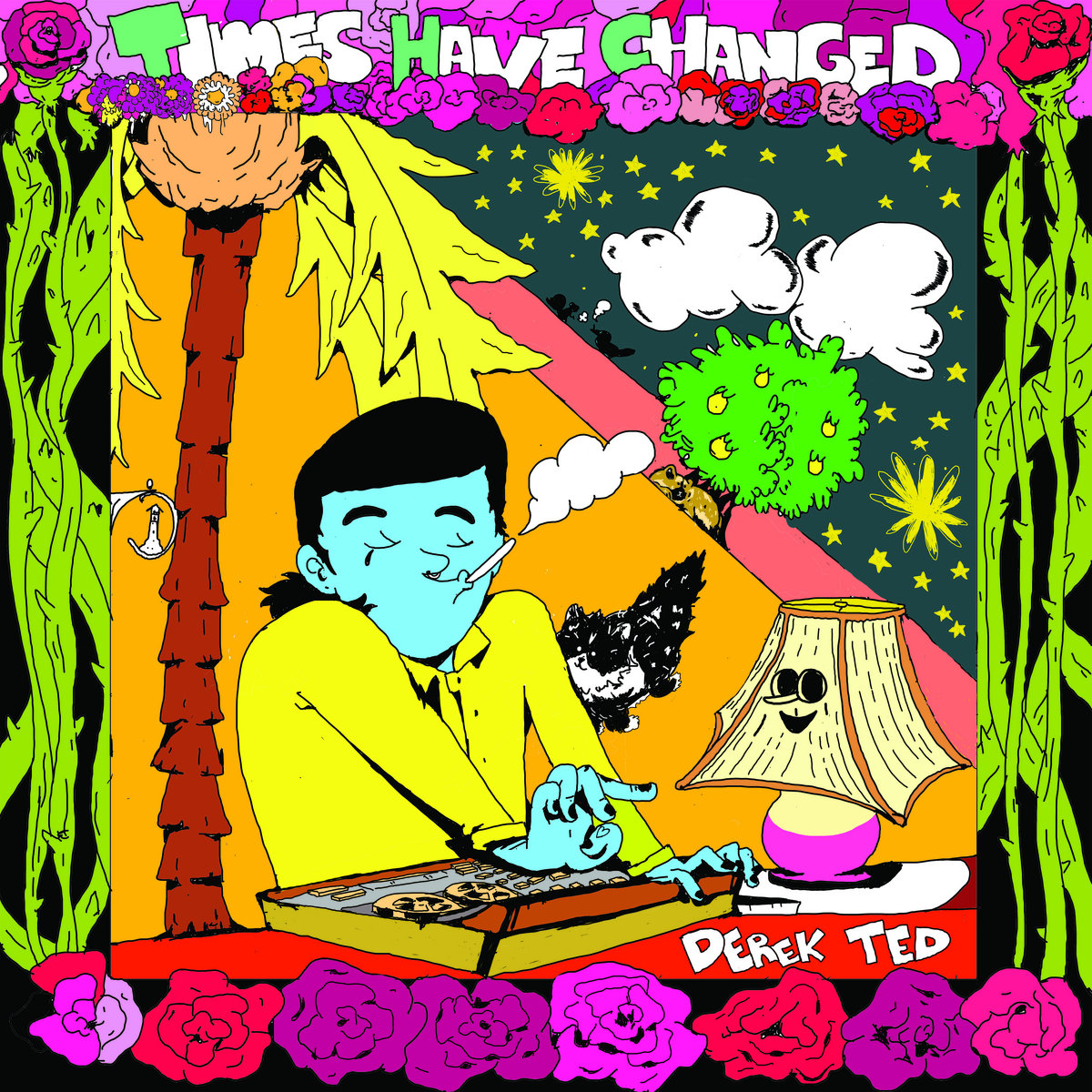 At times bubbly and bright-eyed, at others morose and red-eyed, Derek Ted’s Times Have Changed is a record that finds clarity in clouds of weed smoke, highlighting the clash between the bouncy music and the doom-filled lyrics and finding its strength when that clash is most noticeable. Given that Ted mixed about half of Field Medic’s fantastic grow your hair long if you’re wanting to see something you can change, it’s no surprise how great the record sounds, ranging from bright and bouncy, to surreally dreamlike, to a hauntingly delicate lofi, to sunny psychedelics in just over a half hour’s time.

Opener “Just Go Run” is a catchy tune with some punch to the fingerpicked acoustic guitar paired with a drum machine and trippy electronics in the upper register. From the start, Ted seems in the zone and “L.F.D.D.” and “Stick & Poke” only raise the energy. An infectious pop tune with a psychedelic tinge, “L.F.D.D.” is one of the musically brightest songs on the record, while the lyrics find Ted spiraling in his room, hiding from the sun, smoking blunts in lieu of cigarettes, and drinking from a can because he’s “got no poems left.” Every verse has stand-out lines, but “dark portal opens / only silence after life changed / broken all my crayons trying to draw a self portrait / got so worried about the world today / had to hide inside and do nothing” is one of the record’s many intriguing clashes, with the more grand emotive declarations plopped next to the resolution to just give up for the day and do nothing.

“Stick & Poke” continues the sunny musical energy of “L.F.D.D.” with a catchy chorus of “just take me back / to a time when we could relax / summer shade still feels nice / like it did back in ‘95,” pointing to more juxtapositions on the record, with the happiness Ted’s singing about being mainly the feeling in the past he’s trying to recapture. The brew of emotions is nodded to most clearly with “life cuts like the sharpest knife / stick & poke broken dotted lines,” delivered over a pair of fingerpicked guitars running counter to each other to end the track.

“W The Roses,” “Harder 2 Breathe,” and “Interlude” all bring swirly, dreamlike feelings to the middle of the record at different paces, with “W The Roses” unwinding slowly and trancelike compared to the oddball pop of “Harder 2 Breathe” with its twinkly additions from the piano and electronics. It’s “Someday Soon,” though, that really sticks out as the centerpiece of the record, possibly because of its sheer sonic contrast to the other tracks—just vocals and light fingerpicking sounding like it was recorded during a rainstorm. It almost forces calm and a quiet, rapt attention, and Ted sounds great here on guitar and vocally, delivering lines like “now my life’s a forest fire I can’t control / stand back watch it go” with an extra dose of vulnerability.

Coming near the end of the album, “Times Have Changed” proves to be another high point on the record, a delicate—almost quaint—waltz that works as a showcase for Ted’s vocals. It’s also another moment where the sound of the record is so noticeable with Ted getting a fantastic combination from the drums almost overpowering his vocals and the light acoustic, adding a kind urgency to the song that works even more because of the way it runs counter to the lyrics.

Starting with the lines “you wake up numb now / it’s just something you’ve become / the sun is out there / just drying up the lawn” delivered over a steely, open acoustic pattern “SMB Wrong” is a strong capper to the record, running through many of the sonic ideas we’ve heard so far, and adding the heaviest electric guitar on the record. As throughout the record, there’s a clash of feelings and sounds here, as one of the album’s loudest moments is followed by the song and record ending matter-of-factly with the line “finding fortune in the ashes of my art.”