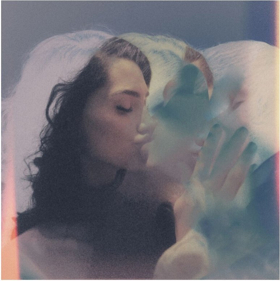 In Florida, it never gets cool enough to sleep below anything warmer than a light blanket. Comfort comes not from the density of a heavy cover, but from the illusion of being shielded, however thinly, from the waking world. You can bury your face with sheer bedding, dubiously protective at best, but all you need to do is open your eyes to see the harsh morning sunlight seeping in any way it can.

Copeland’s sixth album, Blushing, feels like a little world forged under these exact circumstances. Partially obscured by a pillow-y haze of sleep, a dark curtain pulled over a powerful light, Blushing dances on the line between levels of consciousness. Here, the Lakeland, Florida band explores a darkly dreamy realm of indie rock full of ambiguities, making for a record as beautiful as it is mysterious.

Copeland’s 2014 comeback Ixora played out like an icy current—it was adventurous in the way it expanded the repertoire of sounds that the band could draw from. Some songs picked up the threads of their majestic 2008 record You Are My Sunshine (“Disjointed,” “Ordinary”) while others made an effort to bend and twist their formula into something familiar but new. Sometimes these efforts were subtle manipulations of structure and style, like the shimmering “I Can Make You Feel Young Again” or the sparse “World Turn,” a song indebted to Bon Iver’s combination of acoustic isolation and (later on) ‘80s flourish. In other instances, their shift in forms were more jarring—in “Lavender,” a left turn is dominated by harsher electronics than the band had used before. Ixora was a cohesive record, but it went a lot of places over its ten songs.

In contrast, Blushing is a record fully of one piece. It goes down a single rabbit hole and it doesn’t emerge until it reaches the other side. “Pope” opens the record as if gently leading us into a scene already in motion, a dream that picks up from an unknown earlier point. “Pope” is a song full of incomplete thoughts, trailing off over and over, verses ending in a mutedly hesitant “I…” as a gentle, distant piano gives way to a more deliberate, pronounced refrain: “Would you be my love until I can prove that this world is not real?” The song sways between dramatically pointed moments and hypnotic ambiance.

Copeland will follow a similar rhythm throughout the record—the sleepy, slinky bass of “Lay Here” coming alive in the drum-centric “As Above, So Alone,” then singing back below the surface in the fuzzy, level “Suddenly.” It’s a very natural cadence that gives the record a graceful wax and wane, one that helps make Blushing become more and more interesting the more time you spend with it.

Blushing’s songs are occupied by an ever-present conflict of anxiety and devotion. Aaron Marsh coos lovelorn lines in one moment (“Tell me all of your worries, give me all of your love” and “I just want to make you smile on your worst days”) and buzzes fearfully under the pressure later on (“I’m terrified of silence/my thoughts unbearable in the quiet”). At times, the emotions are related, a result of taking on the burden of a loved one; other times, they’re rooted in separate places, thoughts jumping around haphazardly like they do in stress dreams, worries commingling with fantasies. In “Pope” and “It Felt So Real,” an outside voice breaks in to give some solid ground, as if attempting to stir a sleeping narrator. This preoccupation with dreams and nightmares echoes a similar aesthetic hinted on Copeland’s 2006 record Eat, Sleep, Repeat, but here the aura is more enveloping and opaque.

After establishing a distinct mood and style on the first half of the record, Blushing reaches its greatest heights on the second half. “Colorless” is reminiscent of Ixora’s centerpiece—the crashing “Erase”—a moody track giving way to the loudest moment on the record. An honest-to-god guitar solo connects Blushing to its more naïve past, recalling the grittier textures of 2005’s In Motion. It’s an excellent intersection of the band’s history, a welcome cathartic moment from a band that has favored nuance in its more recent output.

“On Your Worst Day,” on the other hand, is a crowning moment for the band in terms of its textural and structural ambition. Patient, wistful, unafraid to unfurl at its own pace, “On Your Worst Day” is one of the band’s gutsiest songs—orchestral but small, quiet but full. Later on, the closing “Waltz on Water” is as blissfully beautiful as this band has ever been, embodies the dichotomy that defines Blushing, inhaling with “I can’t slow my thinking” and exhaling with “I can’t slow my dreaming.”

Throughout its career, Copeland has refined and reformed their uniquely beautiful brand of indie rock. This is a band that has truly become better and more interesting with each record, slowly turning the youthful emo of 2003’s Beneath Medicine Tree into the layered, meticulous, and wonderfully creative music that they’re making now. With its dimly-lit ambiance and nervy fixation on love, Blushing’s masterful command of atmosphere and tone makes for Copeland’s definitive record.