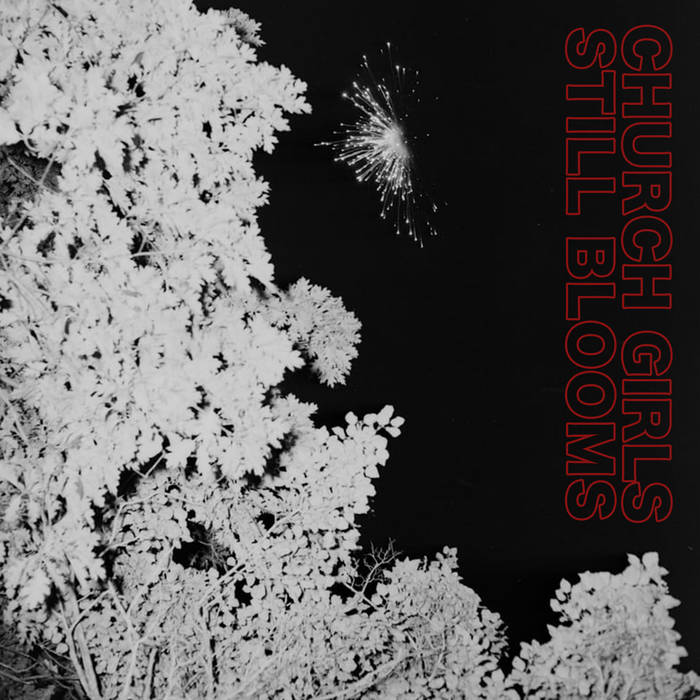 Philly-based indie rockers Church Girls’ 2020 record The Haunt was a fantastic and frenetic album full of introspective lyrics that cut to the core. It rocked hard and made you reflect on your choices—a great combination for pandemic listening, although the album’s response surely took a hit from the timing of the release being a few weeks before all hell broke loose. Their follow-up, Still Blooms, carries a lot of the same themes and energy as The Haunt but on a larger scale, with more intensity and a confident swagger, resulting in the group’s best work yet.

Similar to how Morbid Stuff expanded PUP’s sound from The Dream is Over and Spanish Love Songs took what worked in Schmaltz to new levels on Brave Faces, Everyone, Church Girls have refined their unique style, making an absolute manifesto of an album. With seemingly few overdubs, Still Blooms has a palpable energy throughout, feeling very much like a live performance, as each band member brings their own unique influence to the way they attack their instruments.

“Surface” works great as an album-opener, introducing new listeners to the group’s brutal rhythm section and unmoored guitars supporting Mariel Beaumont’s gut-wrenching vocals and evocative lyrics (like with The Haunt, certain lines from Still Blooms have remained lodged in my head for weeks). “Separated” and “August” keep the record’s pace and themes with lyrics like “we both know I’ve seen you come unwound / Has she seen you with your walls down? / Or do you want to keep it just surface deep?”

“Vacation” and “Undone” close out the first half the record with an ardent energy and lyrics dwelling on how to make it through the day without falling to destructive habits. “And I don’t speak the language here / And you’ve been drunk since noon / Unwind the clocks, pull the blinds, and you’ll find that the sky still blooms / Hate that I’m getting used to this sort of thing / Waiting ‘round to see what tomorrow brings” bites particularly hard on “Undone” before kicking into a huge chorus. With the backing gang vocals in the chorus, it plays like an even more manic take on the title track from The Haunt. The refrain to “Vacation” also stands out, as Beaumont delivers the lines “How come no one ever taught me how / That breathing in and out’s like a small vacation / I’ve left my body for the shore / I’m banking on the thought that they’ll be waiting / When I myself would be out the door” overtop some killer interplay from the rhythm section. It’s a perfect example of the type of lines to expect from Church Girls.

“Basement” kicks off side two with a catchy riff that gives way to a killer bassline in the verse. It’s followed by “Dune,” another great song with an infectious vocal melody that floats above the relentless attack of the band. It makes sense that the band released “Basement” as a single to hype the album along with “Separated” and “Vacation”—they’re great tracks that perfectly capture the vibes of the record. But, it also makes sense that the group wanted to keep tracks like “Dissolve,” “Gone,” and “Visions” in the bank for the release. They make for an incredible three-song run to close out the album, and “Gone” in particular may be one of the group’s best songs to date.

“Dissolve” starts with a huge, fuzzed-out riff, cranking up the energy on an already energetic record. Like “Undone,” the chorus features a call-and-response between Beaumont and her bandmates, which should lead to some fun interplay with live audiences. It’s a fantastic song that is somehow topped immediately by the next track. “Gone” opens with a rollicking riff and off-kilter percussion under lyrics like “should’ve known / That running wouldn’t ease or bring relief / And that heat / Banished to my room, all I can do is drink / It’s killing me / That old threads come undone so easily” that blast into the song’s massive chorus. In the past, the band may have ended the song recalling the opening riff, but at two minutes in, they open up for a jam that ratchets up the intensity of the record even more before the drums and bass carry the group out.

“Vision” jumps right in after the closing beat of “Gone” with the guitar and drums working together to create a hypnotic, dreamy feel behind the refrain. When the song and album end, hanging on the last chord, it feels almost abrupt, like an intense storm that all of a sudden ends, clouds dissipating to give way to clear skies. There is almost a feeling of hazy disorientation in the silence following the record’s dizzying whirlwind that speaks to the strength of the tunes—it’s as if the songs were so urgent that the band had to get them out in one go, as if the silence in the air after final chord was the first time the band stopped to take a breath in the last half hour.