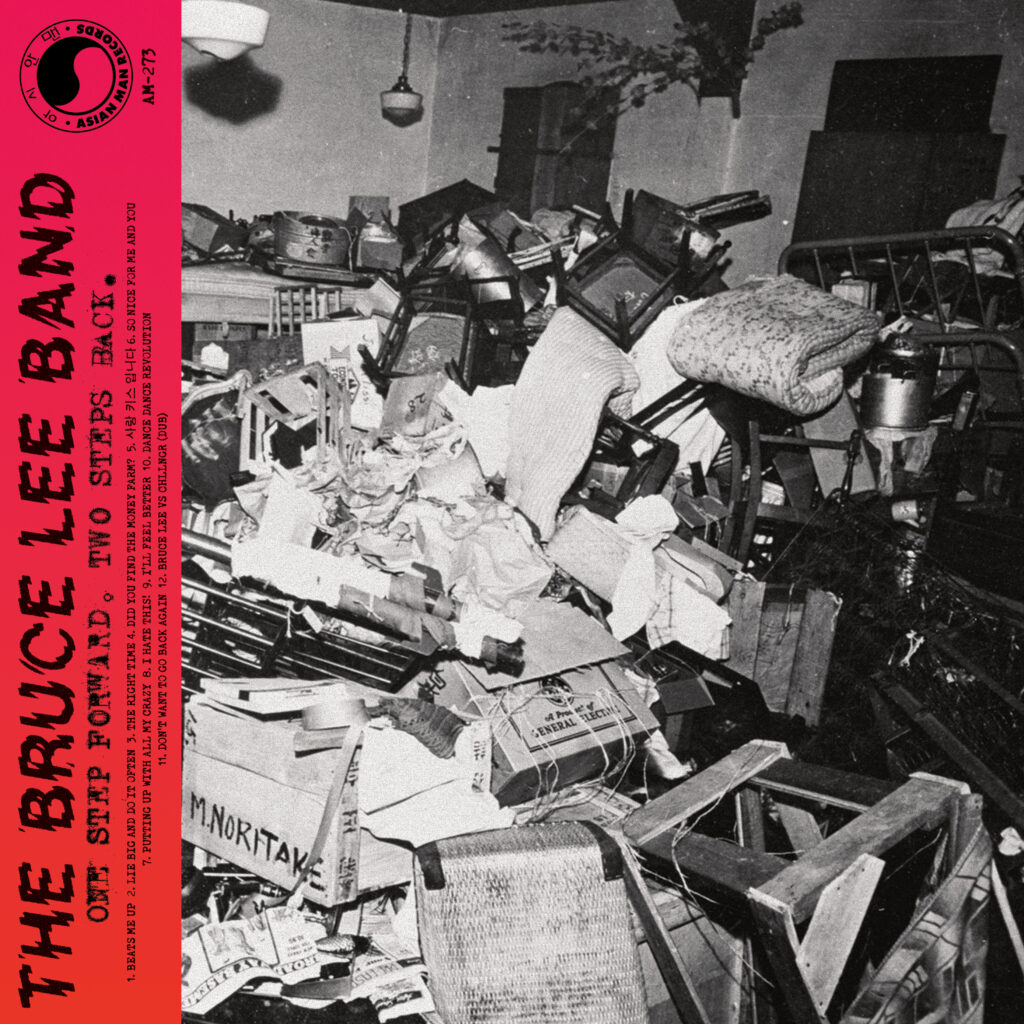 Just a look at the titles of the recent records put out by the Bruce Lee Band (last year’s Division in the Heartland and 2019’s Rental!! Eviction!!) will give you an idea of the lyrical themes Mike Park works with, as he addresses racism, capitalism, and the state of American politics while those in power seem content to continue the death march into a future embracing global capitalism and allowing for no alternatives. The group’s latest record, One Step Forward. Two Steps Back. packages these ideas in the warm and comfortable sounds of classic ska, with the horns, keys, and upstroked guitar delivering the pointedly political lyrics through infectious music that will make you want to dance as much as it will make you want to throw a brick through a bank window.

The album kicks off with “Beats Me Up,” a tune that grabs you right away with a manic horn line and the more reserved chorus accented by the relentless guitar strumming and subtle keys. The track pairs well with “Lie Big and Do It Often,” a fast-paced song pulling melody from the bass as much as the vocals with lyrics that work as a cynical spin on the CIA’s motto (“truth will never set you free / as we declare victory”) paired with the repetition of the title.

“The Right Time” takes on the idiotic right-wing argument of “now is not the time to protest,” or “stick to music,” with the chorus of “strum your guitar, stay in your line / don’t challenge me to feel that pain / write me the perfect melody / sing it sweet so I forget this dissonant reality.” As a little nod to the listener, it’s also one of the catchier tunes on the record, with the chorus being delivered in a sugary sweet way over clean guitars before kicking into a more distorted ending over “when will it be the right time?” So much of One Step Forward. Two Steps Back. will sound almost like comfort-food music to people who grew up listening to the types of ska bands like the ones Mike Park used to play in or has put out on Asian Man Records, and “The Right Time” captures that odd, but beautiful contradiction inherent in traditional ska music where the easy and comforting sound is paired with lyrics pointing to more uncomfortable truths to form that “dissonant reality”mentioned in the song.

When “Did You Find the Money Farm?” pulls things back a bit tempo-wise for the first time on the record, it’s almost as if the band wants to make sure anyone missed the point in the sunny chorus last song gets it here, as Park delivers lines like “pattern your life after powerful people / follow the path through the door / one step inside and you’ll never look back / you ride on the backs of the poor,” alongside a steady beat accented by fills from the synth and some spellbinding saxophone. The ending repetition of “power / lust / greed / you’ve got some money now” drives the song’s ideas home and carries on through the fadeout under some absolutely wild trombone provided by JER . With “So Nice For You and Me,” it’s a slower moment on the record, while the frantic and fun “사랑 키스 입니다” falling in between the two may be one of the most upbeat on the record (alongside the straight-to-the-point “I Hate This!”).

The second half of the record keeps things the tempos fast, with “I’ll Feel Better” reminding you that there is a sunny side to all of this anti-capitalist rhetoric, which comes from communities coming together to lift each other up (even if it is more often out of need from the greater failures of how our society has been constructed). With a slick guitar solo, killer saxophone, and a bridge including lines like “this endless competition is just keeping assholes rich / would it not be a little bit better if we all just had enough to live?” it’s kind of a perfect Bruce Lee Band song.

“Putting Up With All My Crazy” also features some slick guitar, saxophone, and synth over the direct, heartfelt chorus, while “Dance Dance Revolution” works as a hypnotic midtempo tune, building its chorus off “dance dance revolution / I can’t afford tuition / blazing from the smoke that inhales all this intuition / would you bring me back to your safe side?” The latter of the two is followed by “Don’t Want To Go Back Again,” one of the more wild and raucous tunes on the record that works with the instrumental “BRUCE LEE Vs. CHLLNGR (Dub)” to form a strong closing for the album.

With this group of musicians (Park is backed by Jeff Rosenstock, Dan Potthast, and Kevin Higuchi), it’s not a shock that the Bruce Lee Band sounds so tight and tasteful on One Step Forward. Two Steps Back, but what does deserve special note is how energetic and hungry Mike Park still sounds at this point in his career. A legend of the modern ska era, he hasn’t lost any of his edge—how could he, as America continues its fiery descent?—and his musical chops sound sharp as ever here, with the band jumping in and out of different classic ska styles, and always sounding completely at ease while keeping the whole thing as danceable as the lyrics are anti-capitalist.

One Step Forward. Two Steps Back. is out today on Asian Man Records.