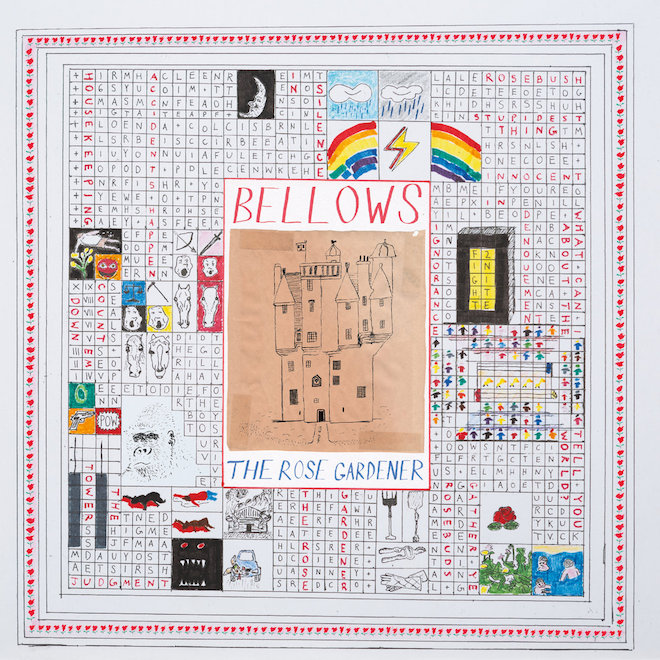 The last time we heard from Bellows was on Fist & Palm, an album that “documents the dissolving of a friendship,” so it makes sense that their return is with the duo of “Denouement” and “What Can I Tell You About the World?,” which are, respectively, “obsessed with the past and the misdeeds of others” and “trying to live life without passing judgment on everything.” It feels like the proper continuation for Bellows, returning to those feelings and trying to resolve and move past them. Frontman Oliver Kalb has said that The Rose Gardener, the follow-up to Fist & Palm, is “about the futility of art-making, and about trying to care for something that’s doomed to fail.” In the end, though, it isn’t a hopeless record, because it’s meant to be “a declaration of defiance against a seemingly insurmountable obstacle.” In this way, in internalizing the struggles of the world but not submitting to them, The Rose Gardener feels like a more mature counterpart to Fist & Palm.

The lyrics do reflect this in turn. The chorus of the opening song finds Kalb declaring that he “love[s] this body / even when it hurts,” which sets the tone for the rest of the album, while he admits on “Stupidest Thing” that “it might’ve been the stupidest thing to get so mad at.” While Fist & Palm was certainly reflective, it lacked (likely by intention) the sense of acceptance that defines Kalb’s lyrics on The Rose Gardener. As the title track winds down, Kalb’s voice can be heard faintly whispering, “it’s cool.” But this follows his assertion that, even “though creeping frost took the other plants / I’m keeping this rose alive.” There’s a feeling of resiliency here, and an acknowledgement that things will not always work out, and that’s fine. But even when that point comes, “I will not back down.”

This lyrical maturity is matched by Bellows’ musical growth. Their fourth LP isn’t a radical reinvention, but it feels like the proper place for the band to be after Fist & Palm. Rather than scrap the Bellows playbook, they’ve added certain flourishes to push their sound further down the path their last few LPs had carved. The horns that swell into focus at the end of “Housekeeping” is the first such example. From there, the band only stretches their sound further in every imaginable direction. Expect more horns, strings, beats, acoustic guitars, and tons of effects slathered Kalb’s voice. On one end of the spectrum is “In Silence,” the closest the band’s ever gotten to straight-up pop—it’s Bellows at their most danceable and the strings that crop up in the bridge only make it that much more fun. On the other end is “The Tower,” built around an interpolation of Gabby’s World’s “What the Fuck”. It’s one of Bellows’ busiest songs, crescendoing from a piano-led verse into cacophony of horns, strings, electronic blips, and warbly vocals before collapsing into a pitch-shifted acoustic coda. It almost feels like a journey in itself.

The album’s centerpiece, according to Kalb, is the aforementioned pair of singles “Denouement” and “What Can I Tell You About the World?” The two, grouped next to each other in the tracklist, couldn’t be more different; in keeping with their lyrical themes, “Denouement” is likely the album’s most aggressive song, a mess of distorted guitars and modulated vocals, while “What Can I Tell You About the World?” is the album’s softest cut, a beautiful acoustic ballad. Though it might give some lighteners genre whiplash, the pair serves as the album in microcosm, a glimpse into the thorny and the sweet parts of Bellows’ world. Sometimes it’s chaotic, but it’s always beautiful.