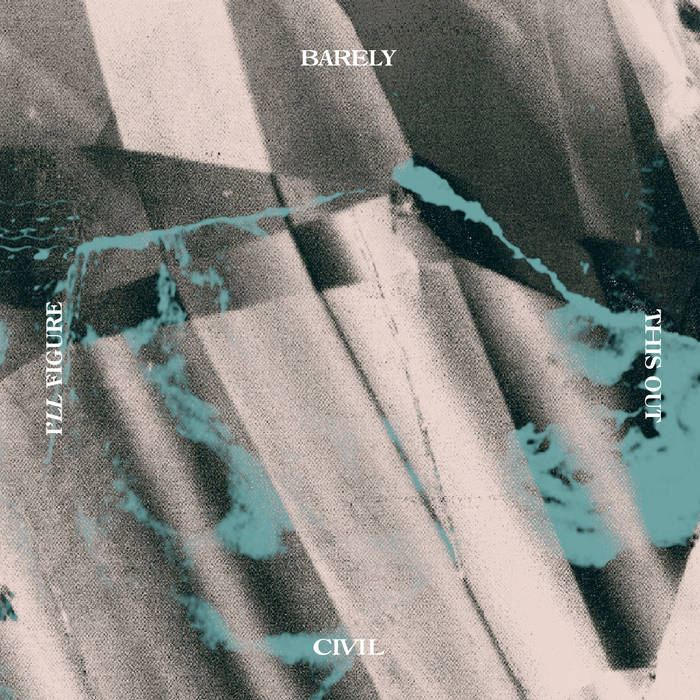 There’s an awful lot of talk about nostalgia when it comes to emo music—it’s a pervasive lens through which we tend to look at the whole genre, our experience of the music often defined by looking back at the (in the grand scheme of things, relatively recent) past, drawing parallels between what’s happening now and what was happening in the scene 10 or maybe 20 years ago, thinking about where best to place this new song in the context of an emo night set full of classics. All in all, it’s a relatively harmless thing that we all do, but I always feel a twinge of reduction when a new album is summed up as “2002 Jade Tree vibes” or something like that (as prone as I am of using that kind of language all the time).

I am very tempted to speak that way about the Milwaukee act Barely Civil’s second album I’ll Figure This Out. What I want to say is that this thoroughly autumnal, chilly, serious, and sad rock record feels like a Drive-Thru Records release between 2003 and 2006, but I’m reluctant to just say that and leave it unanalyzed. So let’s sit with it a while.

I’ll Figure This Out is a sophomore record that takes the band into darker territory, one that feels like the stakes are extremely high with its thematic consistency (take the opening/closing duo of “For Now…” and “…Forever” as an example of this) and its full harnessing of the band’s dramatic tension (the slow build of “Graves Avenue” and “Hollow Structures”). It just feels akin to the turns that bands like The Starting Line and The Early November took when they were making their sophomore LPs, albums that strove to make big composed artistic statements at pivotal, make-or-break moments in their careers.

This is not to say that I’ll Figure This Out is our modern-day version of any of those records, but rather to emphasize that here, Barely Civil have taken the foundation that they built on their solid 2018 debut We Can Live Here Forever and strove to deliver something more thematically consistent, more immediate, and more intensely attuned to their strengths in every way. Although the chances that a band in this genre could potentially hit it big are pretty much nonexistent these days, Barely Civil swing for the fences with their second LP in a way that feels special.

And their ambition pays off in droves. Bringing in producer Chris Teti (of The World is a Beautiful Place) helped Barely Civil level up smoothly and naturally—everything here is crisp and roomy in a way that makes these songs sound as big as they feel. After a rousing introduction in the form of the booming, group-vocal opener “For Now…,” the band spills seamlessly into the stirring “Bottom of the Lake” with its big, expressive guitar solos. This song is a good primer for the scope of the album, with vocalist Connor Erickson establishing the low, straightforward manner with which he’ll spend a lot of the record matter-of-factly delivering these lost, gloomy lyrics (“And I was all alone/ a vagrant on my own”). Later on, he’ll show that he’s saving his more emotionally intense moments for when they really count, like on the album’s thrilling climax “I Woke Up Laughing.”

Throughout I’ll Figure This Out, Barely Civil prove that they’re particularly adept at squeezing the most out of a moment, of building up toward an exciting apex before absolutely hitting it out of the park. “Hollow Structures” starts off as a quiet, painstaking song that seems content to ruminate on a plaintive guitar and a few trumpet interjections. After a while, though, the band takes a striking pause, one that feels like the band is smirking, winding up for the explosive crescendo to follow. Later, on closer “…Forever,” Barely Civil don’t miss the chance to exit with a knowing flourish, Isaac Marquardt’s drums ramping up to a higher intensity as Erickson emphasizes those closing lines—”I’m supposed to go/ so I’ll go.” While the lyrics on this album are often a little on-the-nose in this way, most of the time they function as they do here, with an economical approach that relies less on the nuance of the language and more on the conviction of the delivery.

“North Newhall” is the true triumph of I’ll Figure This Out, the best song on the album and one of the best songs of the year. The abrupt interjections of sound that occur throughout the song, like little jolts of electricity in an otherwise patient track, betray the critical bursting moment that is to follow, as if the band can barely hold back their excitement. With its lonely, loosely knotted guitar line and Erickson’s sweet, sentimental tone (“‘Cause I’ve been eating all your food/ and I’ve been stealing all your time/ and if I’m being quite honest/ I don’t remember what is mine”), “North Newhall” inches toward its sweeping, echoing catharsis. It’s a beautiful song that continues to exhilarate even after plenty of repeat listens.

It’s easy to place this album along a lineage of classic emo Fall albums, with traces of records like The Early November’s The Room’s Too Cold to Foxing’s Dealer peeking through songs like “Graves Avenue” and “Hollow Structures.” But Barely Civil do an excellent job here of creating a definitive statement of their own, an album that is clearly meticulously crafted and thoughtfully composed, one that treads a well-trodden sonic path for the genre but feels fresh enough to wave off any invocations of nostalgia. And who knows, maybe ten years from now somebody will describe another great emo record by saying it has “2020 Barely Civil vibes.”